Details about the book _Reforming Finland: The Diocese of Turku in the Age of Gustav Vasa 1523-1560_ 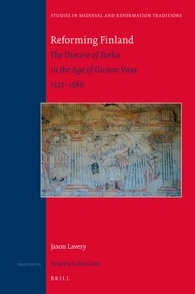 This book examines the Reformation in the Diocese of Turku during the reign of King Gustav Vasa (r. 1523-1560). This diocese, covering a territory better known then and now as Finland, encompassed the Swedish kingdom east of the Gulf of Bothnia. The Reformation in Finland was driven by King Gustav Vasa’s state-building program, sometimes referred to as “royal reform” in respect to the church, as well as the spread of Lutheran theology and practice. Both royal and Lutheran reform were mutually reinforcing and dependent upon one another. The book pays particular attention to the work by reformer such as Mikael Agricola to put the Word of God into Finnish.