Details about the book The History of Finland 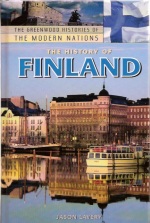 The History of Finland begins with the earliest archaeological evidence of settlement about 10,000 years ago and ends with the presidential elections of 2006. Each chapter describes cultural, economic, religious, as well as political aspects of Finland's past.

Reference features include a biographical section highlighting notable figures in Finland's history, a timeline of important historical events (click the link Timeline of Historical Events to check an updated version of it out), as well as a bibliographical essay for further reading.

The History of Finland was published by Greenwood Publishing Group in its series Histories of Modern Nations which currently comprises over forty volumes.

Brief Descriptions of Each Chapter

Chapter 1 - An Introduction to Finland
The introduction describes, in separate sections, Finland's geography and climate, population and languages, religions, education and innovation, economics, government as well as foreign relations.

Chapter 2 - Finland's Origins: Prehistoric and Historic
Unlike their larger neighbors, the Swedes and Russians, Finns cannot build a national identity based on hundreds of years of visibility as an independent polity on the map of Europe. The lack of a long visible past has provided fertile ground for the creation of fanciful myths about the Finns’ prehistoric origins. This chapter replaces widespread myths with rigorous research drawn from archaeology, linguistics, and genetics.

Chapter 3 - Finland as Part of the Swedish Realm (circa 1157-1809)
For over six centuries, most if not all of the Finnish Peninsula was an integral part of the kingdom of Sweden. This association with the Swedish realm left a lasting mark on Finland, especially in terms of religion, language, political institutions, culture, and economy.

Chapter 4 - The Creation of Autonomous Finland (1809-1890)
Traditionally, the period of Russian rule over Finland (1809-1917) has been known as the “Age of Autonomy.” More recently, some historians have employed the term the “Imperial Era.” These two terms connote different but complimentary perspectives. On the one hand, a separate, well-defined, and autonomous Finland did originate in terms of political institutions, nationhood, economy, and civil society. On the other hand, imperial Russian power helped advance these developments. During the years 1809-90, Finnish autonomy and Russian power worked harmoniously together. Only afterwards did they collide.

Chapter 5 - Oppression, Independence, and Civil War (1890-1918)
The years of Russian rule after 1890 are often referred to as “the Age of Oppression.” This term refers to the growing political oppression that the people of Finland were experiencing at the hands of Russian authorities. At the same time, however, there was social and economic oppression as well. A growing segment of the country’s population felt increasingly exploited by both an antiquated agricultural economy and new industry. The twin issues of Russian policy and growing social inequality dominated the country’s political discussion. They would provide an explosive compound that would result in independence and then civil war. These crises occurred against a backdrop of great-power antagonisms that highlighted Finland’s place at the intersection of eastern and western Europe.

Chapter 6 - Finland Between the World Wars (1918-1939)
In 1917, Finland became one of several newly independent countries arising from the collapse of the Russian and Austro-Hungarian empires at the end of World War I. These new states all struggled with problems of political authority, national identity, economic stability, and security in the new Europe. Compared to the countries in its peer group, Finland fared well in mastering these challenges.

Chapter 7 - Finland at War (1939-1945)
During the years 1939-45, Finland’s place between East and West was never more visible—nor more dangerous. On the one hand, Finland lay in the middle of a German-Soviet struggle for hegemony in Eastern Europe. On the other, Finland stood between fellow Western democracies and their wartime ally—the Soviet Union. Despite long odds, Finland endured years of conflict that resulted in many small countries losing their independence. Finland’s wartime experience is not just a story of survival, but also of transformation. The country emerged from the conflict both unconquered and healed of most of its deep prewar divisions. The war years formed Finland’s national identity for decades to come.

Chapter 8 - Finland During the Cold War (1944-1991)
After World War II, Europe became center stage of a bipolar world dominated by the American-Soviet Cold War. The line between East and West had been redrawn again, with Finland falling in the Soviets’ political and military sphere of influence. At the same time, Finland retained its Western market economy and democratic institutions. Finland was widely viewed as having an unenviable and ultimately untenable position as a small democracy in the shadow of Soviet power. Out of this dilemma, Finland created for itself a secure and prosperous niche in the Cold War divide.

Chapter 9 - European Finland in a Globalizing World
After the end of the Cold War, Finland again has to redefine its place in the world within the contexts of European integration and globalization.