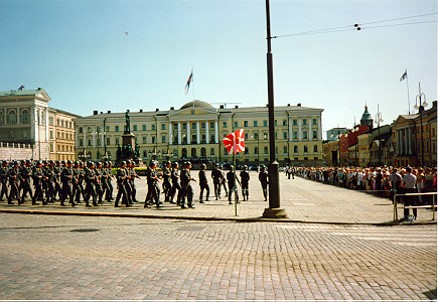 During the first sixty or so years of its experience as an independent state, Finland’s politics were marked by short-lived governments. It was not until the 1980s that a Finnish cabinet remained in office during an entire four-year period between parliamentary elections. Several structural factors contributed to the short lifespan of cabinets. Parliament has always had a multitude of parties with not one party having more than a quarter of the seats in parliament. The calling of early elections has meant the end of a government. Until the 1980s, there was a tradition of governments resigning after a presidential election. Add to these structural factors the political pressures that split coalitions in any democracy. In one hundred two years of independence, Finland has had seventy-six governments.

The term government crisis is used in Finland to describe a cabinet that has either collapsed or about to collapse. My first experience with a government crisis in Finland occurred in December 1982. The coalition which consisted of the Social Democrats, the Center Party, the Swedish People’s Party, and the far-left and mostly communist Finnish People’s Democratic League (SKDL) ended when the SKDL left the government over a proposed increase in defense spending.

In one way, this government crisis was typical of many. After formally submitting its resignation to the president, Prime Minister Kalevi Sorsa was empowered by the president to continue in office and reshuffle the portfolios among the remaining coalition partners. The coalition still held a majority of seats in parliament, although its work was made more difficult since it no longer held the two-thirds of seats then needed to pass budgetary measures without opposition help. In fact, the collapse of many cabinets resulted in most of the parties returning to government, if not immediately then after an election or a short-term caretaker government.

The departure of the SKDL in 1982 would prove of historical significance since it ended an era since 1966 in which the coalition of the Social Democrats, the Center Party, and the SKDL dominated Finnish politics. The end of the so-called “Big Three” or “Popular Front” coalition marked the beginning of a period in which the weight of politics would shift slowly to the right. The SKDL and its major component, the Finnish Communist Party ceased to exist by the early 1990s. In their place a new party, the Left-Wing Alliance was created. It returned to government in 1995-2003 as a partner in the governments of Social Democratic Prime Minister Paavo Lipponen.

Since the end of the popular front in 1982 government crises have been few. Ideological differences between the parties for the most part have narrowed. Coalition partners have made detailed agreements and stuck to them. Since 1982 the only two major government crises occurred in 2003 and 2019. In both cases the crisis lasted a few days and was resolved by the resignation of the prime minister while leaving the coalition intact.

In the summer of 2019 the Popular Front materialized again, but it was no longer the Big Three. The Social Democrats were the largest party still, but the Center was the fourth largest part and the Left Alliance the sixth biggest party. Like in the old Popular Front coalitions, the small Swedish People’s Party is also partner. A party that did not have representation in Parliament in 1982, the Greens, are also partners.

This current coalition under Prime Minister Sanna Marin has received much international attention, mostly because of the fact that the leaders of all five coalition parties are women. Despite the progressive aura around this government and proclamations to foreign audiences as yet another example of the paradise that is Finland, this government has accomplished little in terms of advancing a progressive agenda. This is largely because of the pandemic that has consumed most of the government’s energy. Even many supporters of opposition parties agree that the government and Prime Minister Marin in particular have done well despite everything in keeping the virus in check.

At the end of April the coalition partners entered into their midterm conference. Since the 1980s this conference has become a practice by which the parties revisit their original agreement and negotiate possible adjustments to it. These midterm negotiations drew the coalition to the brink of collapse. The parties were divided over how to handle the budget deficit caused by the pandemic. The main question was over how much to cut with the Center Party pushing for the most severe cuts. Another question was over the question of subsidies for the use of peat as an energy source. The peat is an important but declining energy source in Finland as well as a provider of jobs in rural areas where the Center Party draws its support. The Center Party wanted to weaken the goals for reducing the emissions caused from peat. This put the party at loggerheads with the Greens. For a week the parties negotiated and came to an agreement. More peat use was accommodate by lowering caps on other kinds of greenhouse gas emissions and giving subsidies to peat producers whose product had experienced increases in price and decreases demand. Part of these subsidies will be paid for by raiding the budget on research. So much for a progressive government. Most other state agencies will have their budgets cut.