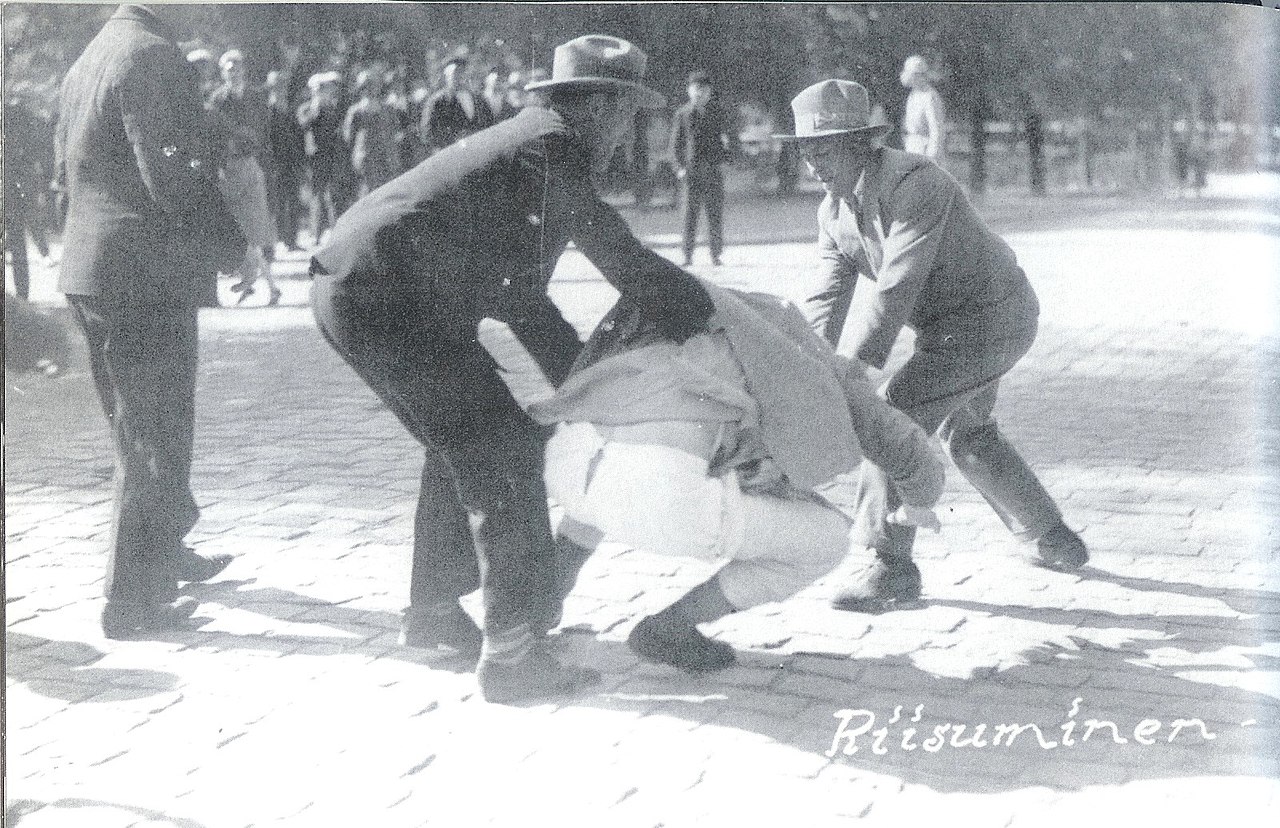 It Can Happen and Has Happened in Finland

On Wednesday 6 January much of the rest of the world witnessed the insurrection at the U.S. Capitol. It was a natural outcome of the slow but steady process of delegitimizing democratic values and institutions that long preceded the Trump administration. What happened in Washington D.C. is likely just a first step in an armed insurgency that will grip this country for months if not years. I can see the United States having to confront a long wave of domestic terrorism like Britain, West Germany, Italy, and Spain had to in the 1970s and 1980s.

If this could happen in the world's leading democracy, can it happen in other democracies? Finns over the last few days has asked themselves if something like this could happen in Finland. With some exceptions, most media voices have concluded that it cannot. People are too well educated, social differences are too small, the country is less politically divided. Keep this last argument in mind.

Many have ignored that a violent attack on Finland's democracy has already happened. More than once. Finland’s proclamation of national independence in December 1917 was followed by civil war in January 1918. The country’s radical Marxists sought to overthrow the legally elected government by force. A little over a decade later those dissatisfied that the civil war had not completely cleansed the country of Marxists organized into the Lapua Movement. The spark for this mobilization occurred on 23-24 November 1929 when Finland’s Communist Youth League held a meeting in the village of Lapua. The selection of this location for the meeting was a deliberate provocation. Lapua lies in Ostrobothnia, Finland’s most politically conservative region. I write more about Ostrobothnia in an earlier blog post. Predictably, outraged local citizens broke up the meeting. Out of this action the Lapua Movement arose to eliminate Marxism “to the last vestige,” to quote its leader, Vihtori Kosola.

The movement pursued its goal by taking direct action against its enemies. The most frequent and best known form of action was kidnapping. Over the course of 1930-32, 254 victims consisting of Social Democrats, Communists, and other perceived enemies were kidnapped. Often the action ended in the victim standing somewhere on the Soviet side of Finland’s eastern border, where the kidnappers believed he should stay. On 7 July 1930, some 12,000 supporters of the movement marched on Helsinki. Obviously imitating the Italian Fascists’ march on Rome in 1922 that brought Mussolini to power, the demonstrators demanded legislation against the Left, or they would take matters into their own hands.

Many of Finland’s leaders reacted to the Lapua Movement’s rise with appeasement, if not tacit approval. The movement’s success in attracting supporters from the country’s two largest non-socialist parties, the National Coalition Party and the Agrarian League, held out the possibility of creating a large non-Socialist party that could rival the Social Democrats. The movement exploited a widespread view in White Finland that the danger to society came from the Left.  Sympathizers did not want to see that the Lapua Movement was both anti-Marxist and anti-democratic.

In this atmosphere, the Lapua Movement pushed its agenda forward. In June 1930, the minority Government under Prime Minister Kyösti Kallio gave way to another minority Cabinet under the National Coalition Party’s P. E. Svinhufvud, the movement’s preferred candidate for prime minister. In order to realize the movement’s minimum demand of a total criminalization of Communist activity, President Lauri Kristian Relander called new parliamentary elections for October 1930. The two-thirds majority won by the non-Socialist parties stemmed from both greater cooperation and administrative measures to prevent the election of communists. The new Parliament then passed a series of laws formally outlawing communist activity.

This zenith of the Lapua Movement’s influence quickly turned into a steep decline. On 14 October 1930, military officers close to the movement organized the kidnapping of former president K. J. Ståhlberg and his wife, Ester. This action placed the movement beyond the pale of acceptability for many sympathizers. In the presidential election in February 1931, P. E. Svinhufvud was elected president. Although a popular figure in the Lapua Movement, he won the presidency in large part because President Relander had lost the support of his own party, the Agrarian League, for his reelection bid. Among the reasons for the party’s decision was Relander’s open sympathy for the Lapua Movement.

In a final act of desperation, the Lapua Movement at the end of February 1932 sought to employ illegal means to remove the very leaders they helped install. The leaders of this coup, headquartered in the southern village of Mäntsälä, called on the members of the Civil Guards (the country's volunteer military auxiliary) to join them in overthrowing the government. The overwhelming majority stayed home. On 2 March, President Svinhufvud, who had been elected with the support of the Lapua Movement, condemned the action in a radio speech. Realizing that they had overplayed their hand, the rebels quickly gave up on their attempt to end Finland’s democracy. After the Lapua Movement was banned by the same laws passed to suppress Communist activity, a new and more openly anti-democratic party developed, the Patriotic People’s League (IKL). This party was allowed to function, because it pledged to operate within the constitution. It participated in elections, becoming one of the smaller parties in Parliament. The IKL’s openly Fascist program attracted only a fraction of those who had supported the Lapua Movement in its heyday. As support for Fascism was growing in other parts of Europe, it was on the decline in Finland.

In the last month or so, many social media figures on the far right have attempted to rehabilitate the Lapua Movement. In the last week a picture of a police woman in the blue and black shirt of the Lapua movement has surfaced in social media. Just today in the news, a group of former members of the far-right Finns Party wants to create a party that will be known as the Blue and Black Movement. Blue and Black were the colors of the Lapua Movement and the Patriotic People's League. In the town of Lapua there is a Lapua Movement museum. On the other extreme, Finland is the only country that, thirty years after the collapse of the Soviet empire, still has a Lenin museum.

Then there is the rise of the far-right Finns Party. This party, like Trump’s movement in the USA, has risen to the place of Finland’s largest party by mobilizing hate online. They have been able to change language. Few in Finland dare publicly to call the statements or actions by part members against foreigners racist anymore. The media and academia engage in tedious debates as to whether the party is far right or not. In a recent email exchange, a journalist from a major newspaper in Finland denied to me that the Finns Party was a far-right party. People have bought the party's canard that any criticism of the Finns Party is a restriction of the its supporters' freedom of speech. Political parties like the National Coalition Party and the Center Party (formerly the Agrarian League) joined the Finns Party in government 2015-2019. The the leader of the Finns Party, once convicted for incitement against a minority group (Finland’s Muslims), in 2019 called Donald Trump “the best thing that has happened to the United States and the Western world in a long time.” In November, over eighty million Americans begged to disagree. Last week he recanted that statement, but then dismissed the insurrection in Washington last week as a kind of hooliganism seen all over the world. Members of his party have engaged in all kinds of violent fantasies online.

Finland’s biggest challenge in confronting the far right is not the far right itself. For most of its existence as an independent country Finland has had a strong record in equality, rule of law, and inclusion. At the same time, Finns have imagined national unity in a very constrictive fashion. The civil war still casts a shadow. Even your most cosmopolitan or liberal Finn is still mentally in the trenches of the Winter War of 1939-40 as far as his or her country is concerned. This is a country that in 1978 once gave over eighty percent of its votes to one presidential candidate. The current president has approval ratings north of ninety percent.  It is easy to be a progressive country when that country does not need to recognize difference. Political parties that have aimed to change the country radically have been brought into politics rather than excluded from it. When I think of the future of the Finns Party I think of how during the Cold War communists regularly participated in Finnish governments.

Most Finns outside of the far right find themselves stuck between their desire to maintain this high and frankly illusory national harmony and their desire to have a country that defends equality and difference. Many Finns think that they can have both by pursuing policies that reduce racism, sexism, and other bigotry without going openly against the bigots themselves. This stems from a larger liberal-left-green view in Finland that all national problems can be eliminated with yet another government program. The fact that the Finns Party gets its energy from opposing immigrants, people outside of the national community, makes this choice even harder. One must either defend the rights of someone outside of the national community or maintain national harmony with a fellow but extremist countryman. Appeasement is too often the choice made.

This kind of appeasement happened once before. It led dangerously close to the end of Finnish democracy.