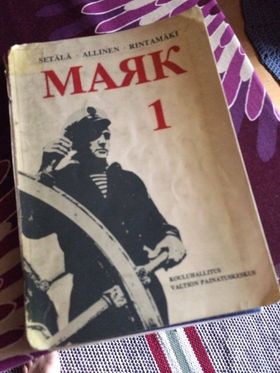 In previous blog postings I have written about the Soviet Union’s influence in Finland’s internal and external politics during the Cold War and the extent to which Finns themselves harnessed Soviet influence for their own domestic purposes. This game of political manipulation never reached into the realms of culture. Until the end of World War II, Finns upheld a national consensus that their country was “the outpost of Western civilization.” The writer Uuno Kailas expressed this sentiment in a well-known poem: “The border opens like a chasm/Before me Asia, the East/Behind me Europe, the West/[which] I, the sentry, guard.” The consensus held that Finland was a Western country, to the east of which lay lands (the USSR) where Asiatic barbarity reigned. After the war, Finland had to accept its place in the Soviets' power-political sphere of influence. It relinquished its self-appointed role as the outpost of Western Civilization. Nonetheless, among Finns prevailed a sense that while Soviet power had to be accommodated, Russian culture did not.

One example of this cultural distance to this day is the small percentage of students who study Russian as a foreign language in schools. In a survey in 2019 published by Finland’s National Agency for Education, Russian was at the bottom of languages studied in Finnish schools in three of all four classifications of language learning. Students can learn as many as four languages starting in first grade and the languages are added as one progresses in school. The only case in which Russian is not least studied language is in the last language group, the so-called B2 language, which students can start as early as the seventh grade. As a B2 language only English is studied less, but that is because over 99% of students started studying English earlier.

Before leaving for Finland for the first time in August 1982, I read a story in Time magazine about the presidential election of 1982 (topic of another blog post). The story mentioned that very few young people studied Russian in school and boys considered it outright unpatriotic. When I got to Finland and had to make a schedule of courses at my school, there were many courses I could not take. Swedish, which my classmates had studied since seventh grade, was off the table. Natural science classes in Finland at the time were taught every year in alternating six-week periods from seventh grade until twelfth. In the US these fields are covered in one year so there were classes like physics that I had had no exposure to yet. To fill the schedule I decided to take Russian. In a previous summer, I had already self-taught a bit of the language using an old Berlitz book.

I quickly learned that what I read in the Time article was correct. While there were many sections of English, French, and German taught at the school, there was only one Russian section. It had only fifteen or so students in it. I was the only boy in the class. My first reaction was great—the other guys in the school can have their Russophobia!  Even today If one looks at the study cited in this posting on page 5, one sees that still a large majority of Russian students are female.

The course was challenging. In addition to the complexities of the Russian language itself, whatever I learned had to occur through a class taught in Finnish by a teacher who could best explain details to me in German. Like many Russian teachers then and now, there was not enough work for a full-time Russian instructor so she taught German as well, another language she was qualified to teach. The teacher and my classmates were incredibly patient with me—something that might not have occurred in a smaller class. Most of the students in the class wanted to learn Russian in order to find work in Finnish-Soviet trade—a major aspect of Finland’s Cold War economy and a reason why even politically conservative Finns such as those who predominated in the town I lived in backed good relations with the USSR.

My friends during that year were very supportive of me learning Russian. Somehow they hoped that I would learn the language, go back to America, and end the Cold War. It was fine for Finns to keep the Soviets at arm’s length but Americans had to be better—a common expectation I encountered in various forms during the Cold War in Finland.

I did not get a great grade from my Russian class, but I did find Russian helpful in future endeavors. I was able to use my language skills later that year in a trip to Leningrad (St. Petersburg) and the two summers I worked at a hotel in Helsinki that catered to Soviet tourists, both topics of future blog postings. I studied Russian for a year at university, but I ended up having to stop in order to have enough space to complete my degree. I will never master Russian, but what little I did learn proved to be an advantage in Finland.

The book in the photograph is the Russian textbook Mayak used by students in Finnish schools during the 1980s. It embodied both the Soviet Union and Finnish-Soviet relations. The few pictures in the book were black-and-white. Unlike textbooks that I used for other languages taught in my school, there was in Mayak virtually nothing on Finland’s relations with the country of the language in question. I remember a German textbook that had a chapter devoted to explaining Finland’s foreign policy in German. In Mayak there was an assumption that a Finn using Russian would use it in a more distanced fashion than one using English, German, or French. One would use Russian to speak across the chasm rather than to cross it.

I encountered this particular copy of the book one evening when visiting a couple in Helsinki a couple a few years ago. At some point in our discussions I told my story about learning Russian. One of my hosts left the room and a few moments later came back with her copy of Mayak. I learned that while I was studying Russian, she was doing the same an hour or so up the road in another town. Opening the book, seeing the pictures and the exercises led to a flood of good memories.