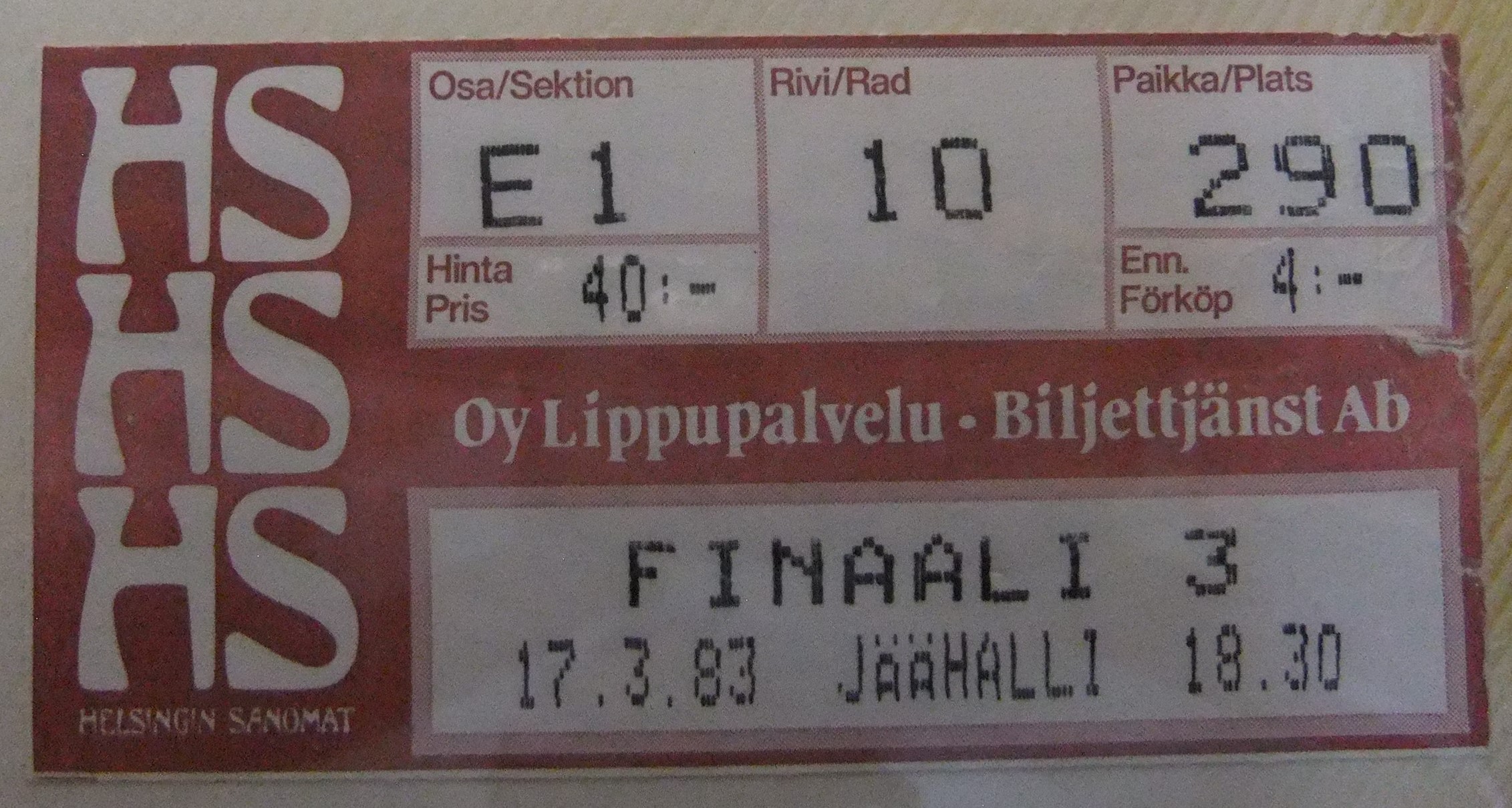 This week ice hockey has been on my mind more than normal. My favorite team in the National Hockey League, the Dallas Stars, had a magical playoff run only to lose to the Tampa Bay Lightning in the finals in game six on Monday. Meanwhile, in Finland hockey's Elite League starts its regular season today in the shadow of the corona virus that canceled the league’s playoffs last season. My team in the Elite League is Helsinki IFK. Current Dallas Stars’ players Roope Hintz and Miro Heiskanen started their professional careers with HIFK.

In the months before I left for Finland in 1982 I came to know an exchange student from Helsinki. I already was a hockey fan and he said that he would invite me to see an HIFK match when we were both in Finland. In the 1982-83 season, HIFK made it into the finals against archrival Jokerit of Helsinki. HIFK lost the first two games in the best-of-five series. With HIFK facing elimination in game three, my friend invited me to see the game. I skipped school and took the six-hour train ride from Ylivieska to Helsinki. Little did I know that in the evening I would see the pivotal game in what it is still remembered as one of the greatest final series in the history of the Elite League.

The game started promisingly for HIFK. It led 2-1 early in the first period and as much as 5-2 in the early stages of the third period. Jokerit then scored three straight goals, tying the game and controlling the momentum. Then Toni Arima scored the winning goal on a pass from the legendary Matti Hagman. HIFK won game three and then the next two games to win its fifth championship.

Finnish ice hockey has changed significantly since the early 1980s largely as a result of growth in revenue streams.  The length of the season has almost doubled. The number of teams in the Elite League has increased. Teams’ corporate sponsorships have become more lucrative. Like with other professional sports leagues around the world over the last decades, television contracts have been the mother lode. Hockey teams that resembled local sports clubs in the early 1980s became full-fledged businesses by the 1990s. In the early 1980s even top players were semi-professional. Matti Hagman, the first player from Finland to play in the National Hockey League, worked as a fireman while he played for HIFK. Today the vast majority of players live well off of their hockey income. The professionalization of players has led to success for Finland in international hockey with Finland winning world championships in 1995. 2011, and 2019 as well as several Olympic silver and bronze medals since 1988.

From the standpoint of this fan, not all of the developments have been positive. The growing competition for broadcast rights has created growing income for the league but eliminated opportunities to watch games on free television or even basic cable, reducing access for many casual and potential fans. One watches games now through a subscription service from Finland’s telecommunications giant. Those who subscribe can watch games on their televisions, smart phones, or laptops in their living rooms or at their cottages. Partly as a result, attendance at games has been on the decline. One of the Elite League’s main plot lines from the 1960s onward was the rivalry between HIFK and Jokerit. That story ended in 2014 when Jokerit’s new majority owners--Russian oligarchs with Finnish citizenship—moved the team into the Russian-led Kontinental Hockey League (KHL). I still think I will see Jokerit return to the Elite League in my lifetime.

I wonder if hockey in Finland will meet the opportunities offered by an increasingly diverse population. Is there room in the country’s de facto national sport for people of immigrant backgrounds? HIFK could draw on its tradition of inclusion to meet the challenge. HIFK was the first team to seriously recruit players from abroad. From its marketing to announcements during the game, the team openly embraces both national languages of Finland—Finnish and Swedish. The team’s official motto “en gång, alltid” is Swedish for  ”once [HIFK] always [HIFK]."

Despite these concerns about the recent past, present and future--Gå IFK!