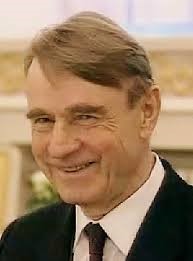 After Kekkonen--The New Sheriff in Town

When I arrived in Finland in August 1982, President Mauno Koivisto (1923-2017) had been in office for about six months. I could not find anyone who did not like him, and I lived in a town that was not a stronghold of support for him in the election of January 1982. Looking back, it feels like it took me years to find a detractor. Mauno Koivisto appealed to diverse parts of the population without being a populist. He had a working-class background but also had a doctorate in the social sciences. He was a social democrat but had run banks, including Finland’s central bank. Like many of his generation, he was a war veteran. For those wanting to leave the Kekkonen era, Koivisto was an anti-Kekkonen. As prime minister, he refused to resign in the spring of 1981 despite Kekkonen’s very strong suggestion that he do so. Unlike Kekkonen, Koivisto did not keep a ”court” of followers. Instead, he saw himself as the lone sheriff played by Gary Cooper in the movie ”High Noon.” For those who sought continuity with Kekkonen, he vowed to uphold Finland’s policy of constructive appeasement toward the USSR, officially known as the ”Paasikivi-Kekkonen Line.”  Upon his election, Koivisto called for a wide-ranging national discussion on the powers of the presidency, the topic of a future blog entry.

Mauno Koivisto was certainly the right man for the time when he was elected president in 1982. By the end of his second and final term in 1994 many in Finland--including me--saw him as someone made obsolete by events. The Cold War was over. Finland’s postwar economic juggernaut had crashed into depression. The Soviet Union had collaped. In the quarter century since his departure from office, a picture of a much more active president has emerged. We now know that he was prepared to declare a state of emergency to save Finnish banks in the early 1990s. He engaged—some would say unduly influenced-- the courts in support of the banks. During the late 1980s and early 1990s, Mauno Koivisto with most of the political elite expressed public concern about and criticism of the struggle for national independence in the Baltic States. Finns were concerned that the upheavals in the Soviet Union could have negative impacts on Finland and Finnish-Soviet relations. Behind these statements of concern and criticism, we now know that President Koivisto was involved in the secret support of tens of millions of dollars from Finnish state coffers to the Baltic States' independence movements

Further revisions to popular understandings of Koivisto’s life will likely come with the very recent publication of a biography of Kovisto’s life until 1959 by Tapio Bergholm. The book challenges the image Finns have had of him from the 1960s onward—a thoughtful, deliberate, unemotional, even-tempered man. Bergholm reveals that before his arrival in Helsinki in the late 1950s from his native Turku, Koivisto was a more openly emotional man and was a much more radical socialist thinker than he would demonstrate in his years in national politics. History does not repeat itself—but it is always being rewritten.