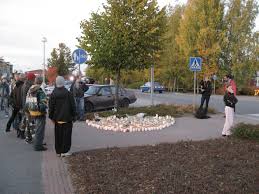 On Tuesday of this week a trial began in Kuopio in eastern Finland. The accused is a 25-year-old man charged with attacking his fellow students and teachers in a classroom with a sword last year. Before he could be stopped 25 people were injured and one killed. In September 2008, a twenty-two year-old student at a vocational school in Kauhajoki in Ostrobothnia killed ten in a shooting rampage before killing himself with his legal gun. Months earlier in November 2007, an eighteen year-old student entered his school in the southern Finnish town of Tuusula. Legally possessing a handgun, he shot eight people, including the school’s director, before shooting himself. He had told of his plans days before in You Tube video.

Over the last two decades Finland has been at the center of world’s attention for its educational system. The school system in any country reflects both the strengths and weaknesses of the country at large. Finland has problems with violence that undermines its reputation as the world’s happiest country. A recent doctoral thesis concluded that Finland ranks second among EU countries in the rate of domestic violence. Finland’s overall rate of violent crime corresponds more to the higher rates in the Baltic States than with its Scandinavian neighbors to the west. Acts of violence against police have doubled since the year 2000. More than one in five people in Finland have experienced violence or the threat of it at work. One historically high form of violent crime—suicide—has been on the decline. In research of sixteenth-century Finland I examine sources known as the bailiff’s records. They are central to anyone studying Finland’s sixteenth century. These records were kept by local bailiffs and include such documents as letters, tax ledgers, and lists of fines levied in court. One can go for pages reading lists of people who received three-mark fines for assault. If one reads only the bailiff’s records, one could easily think that all people did in sixteenth-century Finland was assault each other.

The same reasons for violence are trotted out after every mass killing, whether in school or not: Finns’ inability to express their feelings constructively, the abuse of alcohol, and bullying among others. Some laws have been changed, such as raising the age to possess a handgun to twenty, but many initiatives have gone nowhere.  There has not been a mass crackdown on the ownership of firearms such as those in Great Britain or Australia. For the reason behind the reluctance I look to another country unwilling to confront its culture of violence—the United States. In the United States, crime is largely understood as a function of individual moral weakness. A mass murderer is often easily explained away as an isolated incident that nobody could have helped. Some people are just evil. In Europe and in particular in very homogenous countries like Finland, crime is understood as coming out of the cracks of what should be a cohesive society that cares for all. Individual crime emanates from a collective context. While I would argue that this approach to crime leads to lower overall rates, it does mean that to confront violent crime effectively society must admit a collective weakness. A cohesive society does not mean a perfect society.

An update to the above entry written 10 September: On 17 September 2020 European Court of Human Rights found Finland guilty of violating the right to life in the 2008 school shooting in Kauhajoki.